Presently less than a year old;
208 years old prior to most recent reset[1]

White prior to reset, presently unknown.

"Don't worry! It's a minor angst-induced awakening! She totally won't be in a murderous rage afterwards!"
—EGS Main Story Comic for 2010-07-07

Zeus, previously known as Jerry, is an immortal who reset very recently in the comic's timeline. Jerry had a proper immortal death and Zeus retained all knowledge his previous incarnation intended for him, but there are obvious differences in his personality.

Prior to resetting, Jerry was a 208-year-old immortal who dressed like Santa Claus, and who created the Hammers when he was 75 years old so that men could make inappropriate comments to women and not feel guilty due to the fact that women could punish them with the painful-but-harmless hammers. He recently reset his life; consequently, the Hammers can no longer be summoned by all women when inappropriate comments are made.

He has a beam attack, described as a serenity spell, which instantly induces serenity in its target whilst causing tactile illusory cute animals and grass with flowers to appear around its target. He used it on Susan when she underwent her angst-induced awakening upon discovering the reason behind the Hammers' creation.[2] The spell wears off within a few minutes, taking the illusions with it. Surprisingly, the spell Susan gets from the awakening was essentially the Hammers, only without any prerequisites; therefore she can still summon them, and she can summon them whenever she wants.

When he discovered that the French Immortals sent Susan and Nanase to kill the "vampire" Aberration instead of contacting proper authorities, or at least an adult, he decided that the two were owed a debt by the immortal race. As he was available, he decided that he may as well be the one to pay it. He vowed that he would do so, in whatever life he had to.[3] 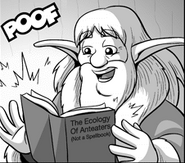 Jerry with Susan's spellbook
Add a photo to this gallery

Now, following his reset, Zeus is a very young immortal. He looks twenty-something and still wears a Santa hat, in spite of not otherwise looking especially Santa-like.

He honors the pledge made by his old self, although he doesn't seem too enthusiastic about it[4] ... it's probably costing him time he could spend having fun.[5]

For this reason, during Family Tree story line he saved Diane (because he thought she's Susan sister) from being affected by the spell in the punch[6] and created the two snow angels[7] which inspired Ellen to copy Nanase's Guardian form and therefore allowed them to defeat Not-Tengu. He attempted to rationalize this as fulfilling the Immortals' debt to Nanase and Susan, thus justifying abandoning the vow, but was rebuffed by a vision of his former self.

His recognition of Diane as Susan's sister was ultimate argument convincing Susan,[8] but he actually reached that conclusion for same reason as Ellen and Nanase did[9] and didn't exactly have any good ideas for confirming it.[10]

He almost succeeded with another idea how to fulfill his debt in safer way than hanging in Moperville[11] but his "enthusiasm" in keeping Susan and Diane safe was renewed,[12][13] probably by Pandora.[14]

His new name was finally revealed when he intervened during a vampire attack[14] in a mall, while trying to get Susan and Diane to safety. With Jerry's opinion on names like Zeus,[15] this is either change in personality ... or he ALWAYS goes with Zeus until he gets old enough to know better. 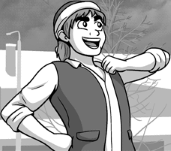 Retrieved from "https://elgoonishshive.fandom.com/wiki/Zeus?oldid=27299"
Community content is available under CC-BY-SA unless otherwise noted.