Sirleck was a body snatcher aberration who was allied with Magus. He was parasitic and possessed an old man beyond the old man's brain death. "Sirleck" is an anagram of "Lickers". "Stone Lickers" is the literal translation of Lamprey. Lampreys are blood sucking parasites; Sirleck was, in essence, named after them. It is implied that he played a hand in Ellen's creation; specifically, he bribed the security guard at the PTTAOLUTASF. He could communicate with beings on the spiritual plane independently from his host. Beings on the physical plane saw only his host, not him. He could change hosts at will. Like all aberrations, Sirleck used to be human and used magic to voluntarily become an aberration in order to achieve immortality. It was hinted that Sirleck was plotting to use Magus as a new host once he got his body back[1] which he did in fact attempt but was stopped by Ellen.[2] He was then killed by Magus.[3] He first appeared in the EGS Main Story Comic for 2010-04-09. 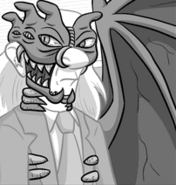 Retrieved from "https://elgoonishshive.fandom.com/wiki/Sirleck?oldid=33450"
Community content is available under CC-BY-SA unless otherwise noted.