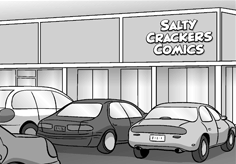 Salty Crackers Comics is the comic book shop where Justin and George work. Regular patrons include Dex, Bill, Duck, and the rest of Bill and Duck's friends. It is known to sell trading cards, comic books, shirts, toy hammers, and video games. Susan likes to go there to find something to read, play games, or hang out; Nanase goes there to keep Justin company during his working hours and sometimes assist him. Ellen has visited the shop a few times, but does not like to hang out there; Elliot planned to do just that, but ended up fighting a fire summon created by Dex instead. It is not known if Elliot plans to return.

Geographically, it is near a river with a bridge, which proved useful in unsummoning the fire summon when it attacked.

The shop is one of at least four that are known to exist in , but all that is known about the others is that Justin has visited one, and it might have a Superman standee.[1]

It was revealed during the Summer story arc that all of the shops are owned by Justin's uncle Jim.[2]

In Nepotism, Grace started working there.

The store not only sells cards, but also hosts Magickal Gatherings tournaments.

Grace
Add a photo to this gallery

Susan
Add a photo to this gallery

Retrieved from "https://elgoonishshive.fandom.com/wiki/Salty_Crackers_Comics?oldid=31580"
Community content is available under CC-BY-SA unless otherwise noted.