"I will destroy the world as it is now known and replace it with another."
—Pandora talking to her son

Pandora Chaos Raven,[6] also going by Box,[7][8] is a shapeshifting Immortal of unknown origin and power, though she has commonly taken the form of a small girl, dark cloud or adult woman. She is first seen in the Hidden Genesis arc in her "girl" form, and later in a monstrous "cloud" form, though much later she is seen taking an "adult" form. She seems to have links to Magus and some sort of unknown goal which involves helping Magus escape from the spiritual plane. She is evidently the mother of Adrian Raven.[9]

Pandora was reset for breaking immortal law after saving her son from being shot at.[10][11] She used the opportunity the reset gave her to destroy a lot of aberrations[12] ... which revealed a lot of immortals to humans, triggering a Seer meeting to determine the next change in Magic.[13]

Pandora appears in the beginning of the Hidden Genesis arc, speaking to Mr. Verres, Agent Wolf and Agent Cranium about the nature of a dimensional occurrence that had been caused by the arrival of Magus. She described Magus as an egg that had fallen from his nest, which she had caught and hidden in a new nest. She went on to say that Magus would grow to become a hawk while the agents were mice, but encouraged the agents to become hawks themselves for the sake of her entertainment. She then disappears, leaving the agents confused.[14]

Later she appears to Magus to mock him for his failure to successfully escape the spiritual plane and give him advice, leading to him following Ellen. She chastises Magus for referring to her as "Chaos": and tells him to be more creative, refusing to give her real name, which she later reveals to be Pandora. She reveals her shape-shifting ability after Magus had left, changing from a dark cloud of random shapes and beings to the small girl form seen earlier.[15]

Pandora is next seen in Sister II when Abraham arrives to kill Ellen, appearing to prevent Magus from leaving and ordering him to follow Ellen and protect her.[16] After Raven is defeated in combat by Abraham, Pandora is shown watching over Raven and she restores his illusion, telling him she would take care of the situation and referring to herself as his mother. Later she assumes the form of Fox, Nanase's summon, to move Nanase from the school and wake her up to protect Ellen.[17]

After Abraham is defeated by Nanase and rendered unconscious by Mr. Verres, Pandora urges Magus to amplify Verres' anger so that he will lose his self control and kill Abraham. Pandora threatens to abandon Magus if he will not cooperate, but Magus refuses regardless. Pandora, enraged, attacks him, tells him her full name, and then leaves him isolated on the spiritual plane.[6]

Later, Pandora meets with her son in the form of Agent Wolf, once Raven sees through the deception, Pandora berates her son for fighting with Abraham, while Raven yells at his mother for allowing Abraham to attack the school. After Raven insists he wants to make a difference, Pandora says she will destroy the world as we know it and replace it with one in which Raven can do as he pleases without restraint.[18] She later reveals her child form to a news camera crew while they are interviewing a student in front of Moperville South. She calls attention to herself by appearing out of nowhere, floating, and laughing, before disappearing in a blast of light and disruptive radiation.[19]

Pandora gave people magic marks without them being aware: she may have explained what she was doing while hidden on the spiritual plane so they couldn't really hear her,[20] which is probably a loophole of some immortal rule. It was assumed Dex was one of them, although after the reveal that it was Voltaire who did the "bring the apocalypse" thing with Dex[21] this may or may not really be true. The fact that she gave magic marks without knowledge or consent is terrifying to Noah.[22]

It is possible that she is behind Magus' situation, and that it has to do with Adrian somehow, given how she tried to force Magus to influence Abraham's death and her statement to Adrian that she would destroy the world for him.

Due to immortals getting more powerful with age and going crazy after two centuries,[23] their age (i.e. how long it has been since their last reset) is very important.

The first indirect information about Pandora's age was that Adrian Raven wanted to fight for centuries, and in the commentary Dan's note that he has apparently known his mother, Pandora (AKA Chaos), for hundreds of years.[2]

Later, Pandora herself says she's hundreds of years old,[1] and when Sarah directly asks her age, she says she answers such questions with "299" for few centuries now.[3] While she could have meant it as a joke or started saying it before actually reaching 299, more probably it really means she was more than 599 years old (assuming "a few" is at least 3).

For an upper limit, we have even less to go on ... if she was more than 2000 years old, she might have said she's "thousands" of years old instead - but she may not have wanted to admit it, possibly even to herself. Or, she might have lost count.

Pandora's abilities have been shown to include shape-shifting,[15] and returning her son's illusion.[9] She also appears to be able to teleport, but it could be just her going quickly through the spiritual plane.

It is known that Pandora gave magic marks to the following people (or at least considered doing so):

Not only is this a vast majority of all known marked people in the comic (only one mark was given by someone else - the one Susan got), it's also very unusual and dangerous[22] that she marked people without their knowledge or consent. As stated above, it's possible that she used some type of loophole by giving the necessary information to people while on the spiritual plane,[20] so they couldn't actually hear her, similarly how Voltaire was using a loophole with "empowering and guiding" Dex.[34]

We also still seem to have two marks unaccounted for.[35] 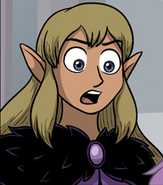 Rare case of Pandora being surprised 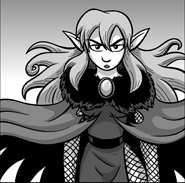 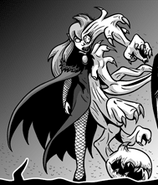 Pandora in a half humanoid half monstrous form 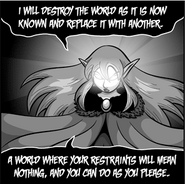 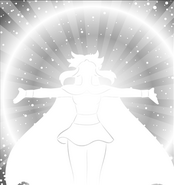 Pandora moments before dying
Add a photo to this gallery

Retrieved from "https://elgoonishshive.fandom.com/wiki/Pandora_Raven?oldid=36092"
Community content is available under CC-BY-SA unless otherwise noted.