Nanase's Fairy Doll can refer to a magic spell Nanase has, the fairy avatar of Nanase it creates or the inanimate doll it leaves after using. 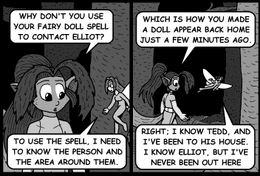 If Nanase is familiar with a person and their location,[1] she is able to create a miniature fairy doll of herself near them to communicate.[2] If such a doll is already present, she will inhabit it instead of creating a new one. In fairy form she has several abilities, some of which we see her gain; foremost is the ability of flight, which is so easy and natural for a fairy that we rarely see it not flying. She retains her fighting abilities whilst in doll form; however, her physical strength is scaled down accordingly (unless she is casting Fae Punch (see Fairy Doll abilities, below); it is a short-ranged projection of a standard punch -- but since it's HER standard strong-by-training punch, it's pretty tough).

While controlling a fairy doll, Nanase's body remains motionless. She can also make it glow, alerting others to her use of the spell, although this uses up additional magic energy.

Nanase currently has several fairy dolls that she can use. A new one is created after initially contacting someone, or when her features change significantly (such as being turned male[3] or with significant change of hair[4]). When more than one doll is attuned to her desired target, she will inhabit the body of the doll closest to her target.[5]

When a fairy doll is harmed, Nanase is not harmed,[6] but feels the physical pain. If one is destroyed, she wakes up in her real body again. She appears to feel significant pain when a fairy doll is killed,[7] but precisely how much is still unknown. A destroyed fairy doll doesn't disappear, at least not immediately, but rather leaves physical doll parts.[8]

When Nanase is controlling (possessing) the fairy doll, its physiology is exactly like a tiny Nanase with wings and a tail.[9] When she is not, it's like a common doll with a Nanase-like head... or, perhaps something more like poseable manikins for artists,[10][11] considering Susan called it "really poseable".[12]

Despite her small size, Nanase is not light enough to fly using just her wings. Just like other characters with wings, such as Taurcanis Draco, Not-Tengu, Vlad and Nanase's guardian forms, she is using some manner of levitation to keep herself up.[13] Her wings may be somehow involved in that levitation or may be giving her better maneuverability when flying.

Note that if she WOULD need her wings to fly, keeping the standing-in-the-air pose[14] would be extremely hard and hugging another fairy while in the air[15] impossible.

Andrea described the Fairy Doll spell as "avatar with persistence" and mentioned that persistence is very rare option and that it breaks lot of physical laws.[16]

Beside the innate ability of flight, the fairy form comes with "spells of its own", specific abilities that can be activated while in fairy form. Different terms (power, ability, spell) have been used in the comic to describe them, but from Dan's comment on EGS Main Story Comic for 2004-02-18 ("Bad-Ass Fairy Powers"), which was added May 6, 2015[17], it seems that he considers them all to be of the same type. Originally, Nanase only knew Fairy Wing Glitter, but over time -- possibly due to her extended use of the fairy doll spell -- she has gradually learned further abilities.

In order of appearance, the following abilities have been shown:

The ability to temporarily spread glitter; this can be used e.g. to leave a trail.[18] The effect vanishes after "a few hours at most".[19]

Nanase can use marbles "like crystal balls" to watch her real body "as through a tiny peephole" while she is in fairy form.[20] It is not known whether this ability necessarily requires a marble or if perhaps any round object of comparable size would work as well.

When in fairy form, Nanase can project a burst of kinetic energy (or something similar). In her own words: "short range, no stronger than a punch... but they're my punches".[21]

Originally, the newly created fairy always wore the same outfit when it first appeared -- a weird pink full body suit. Nanase has learned to choose different outfits for the first appearance.[22] It still needs to be "simple", but Tedd didn't explain what that means... while her spell book is likely to explain it in TOO much detail.

It is noteworthy that Nanase didn't notice this upgrade despite otherwise keeping attention on her spellbook.

At some point shortly before the Ashley Introduction Party, Nanase gained the power to change the clothes on a fairy doll she is currently inhabiting[23]. The new outfit must be based on clothes Nanase already owns and has prepared in advance.

This spell is one of Dan's favorites.[24]

Nanase's fairy doll spell is the only known variant leaving a physical doll. Other people are capable of summoning fairies as a summon that disappears after use: Susan does it by summoning a copy of one of Nanase's fairy dolls from her summoning storage, while Dex has a magic mark spell allowing him to summon such a fairy.

Those summoned fairies look very similar to Nanase's (although Dex' fairy doesn't have a tail[25]), but by default they work semi-autonomously based on the summoner's subconscious. According to Tedd, Susan should be able to fully transfer her consciousness into her fairy and control it much like Nanase,[26] but as of April 2015 she has not yet tried to do so.

Retrieved from "https://elgoonishshive.fandom.com/wiki/Nanase%27s_fairy_doll?oldid=35233"
Community content is available under CC-BY-SA unless otherwise noted.