"Wow. I am really desperate for a plan."
—Magus after deciding to amplify Ellen's desire for pepper

Magus is a human from an unspecified universe, specifically that reality's version of Elliot,[4] who spend lot of time trapped in the spiritual plane of the Main Universe. His actual name is Ellen[1], Magus being nickname.

He is first seen directly in the Grace's Birthday Party storyline, though his influence can be seen as far back as the first Sister arc. In the main universe, he is shown as a black silhouette with white eyes, but his human appearance is shown briefly in the beginning of Hidden Genesis. Magus' natural appearance varies from his spirit appearance only in that he doesn't appear shadowed. Initially, he worked together with the Immortal woman he would come to refer to as Chaos, believing that she would help him regain his physical form; however, she abandoned him when his conscience stopped him from following her orders. Magus somehow believes that intercepting one of Ellen's transformation beams when it connects with Elliot is the key to return to the physical plane. In Catspaws, he manages to posses Elliot it with help of Sirleck controlling Ellen.[5] He then uses Dewitchery Diamond to separate himself from Elliot and escapes after short battle.

In his home universe Magus went to a school for battlemages, learning to fight monsters.[6] During a sparring match with Terra[7] Magus activated a sabotaged item,[8] which launched him into the spiritual plane of the main universe.[9]

The Immortal Pandora helped him by giving him a convoluted plan to get his body back in order to entertain her.[10]

As part of Pandora's plan Magus used his abilities to amplify Tedd's anger, causing him to shoot Elliot with the Transformation Gun,[11] eventually resulting in Ellen's creation.[10] He met Sirleck when Pandora coerced him into bribing the PTTAOLUTASF guard.[12]

He apparently wasn't involved in the plot again until he appeared at Grace's birthday party. He once more used his amplification ability, though this time trying to get Ellen to fire her transformation beam at Elliot with him between them,[13] in an attempt to escape the spirit plane. He failed in this attempt, as Ellen changed targets at the last second due to partly resisting Magus's manipulation, firing the beam at Tedd.[14] He was then detected by the two French Immortals and fled, displaying an ability to split into multiple copies or create an illusion to that appearance.[15]

He was later shown speaking with Pandora (whom he referred to as "Chaos")[16][17] and, after some discussion, Pandora sent Magus to follow and observe Ellen,[18] which he was shown to be doing on a few occasions later.[19][20]

During the later parts of Sister II, Magus attempted to divert Abraham's desire to kill Ellen by amplifying his guilt.[21] Whether or not Magus efforts assisted, Abraham surrendered to Nanase and recanted his belief that he needed to kill Ellen, but was blasted by Mr. Verres while agents Cranium and Wolf attempted to apprehend him. While Abraham was in this vulnerable state, Pandora ordered Magus to amplify Verres' anger so that he would kill Abraham[22] and revealed that it was her real purpose for making Magus follow Ellen.[23] Magus refused, and was punished quite thoroughly by Pandora as a result, ending with him being seemingly stranded in an isolated plane. She did finally told him her name, though - Pandora Chaos Raven.[24]

Magus decided to seek help from someone else.[25] That being was Sirleck,[26] a body snatcher aberration. Initially Sirleck refused to help Magus, but Magus threatened to bother him tirelessly if he did not listen to his plan, since he did not sleep, run out of breath, or have anything else to do, and Sirleck could not harm him. Hearing this, Sirleck relented, and agreed to hear him out.[27] Magus explained that once he had his body back, he would be a powerful wizard with the magical ability to turn straw into gold. After revealing no other mortal knows who he is, Sirleck agreed to help him get his body back.[28]

In Sister 3, Magus and Sirleck succeeded in their plan to have Magus possess Elliot. In first phase, vampires paid by Sirleck[29] distracted Helena and Demetrius, so they wouldn't watch over Elliot.[30][31] In second phase, Sirleck possessed Ellen and makes her lie to Nanase to get her out of way.[32][33] Then he used her beam to put Magus into Elliot.[34] Magus then puts Ashley (who was on date with Elliot at that time) to sleep ...[35]

... and took her with them to explain himself to her (and to the audience),[36] starting with confirming that he's an alternate universe Elliot and Terra is an alternate universe Tedd and retelling what was shown in Hidden Genesis,[6] then continuing with telling them about Pandora's role[10] ... and mentioning he WAS in France with Nanase.[30]

At the PTTAOLUTASF Magus used the Dewitchery Diamond to get a body of his own.[37] When Ellen forced Sirleck to leave her body[38] (after stopping him from leaving when he would have an opportunity to possess Magus[39]) Magus killed Sirleck.[40] Then Magus told Elliot and Ashley that people in his universe would change sexes for their jobs, that also did it because of his gender identity and that he wanted to transform Ellen (who was unconscious after the possession) because he assumed that she was a trans man too.[41] He argued that Ellen had been forced to be a woman.[42] Elliot transformed into a Cheerleadra-like form and took Magus outside the building to stop him from transforming her without asking.[43] They argued about the gender roles in Magus's universe[44] and Magus explained that he was going to wake Ellen.[45] Then Ellen sent the urteronc flying out of the building with her new beam spell.[46] The urteronc and Magus then fought[47][48] and Magus defeated the urteronc.[49] When DGB agents arrived by magical doorways,[50] Magus fled.[51]

Magus was then seen reveiving a pizza delivery at a hotel, where he may have warded his room so that no one could see it unless he showed himself.[52]

Ellen was born female, but is now in a male form and identifies as a man. [53] The fact that he assumed a male form in the spirit plane, when possessing Elliot, and when reincarnated by the Diamond strongly suggests that his gender change was a base form shift.

Magus regrets[30] many of the things he felt he had to do to regain his body. In particular, he felt guilty over sending Aberrations to attack Moperville[54], even with the justification that doing so put those aberrations in the path of people who could kill them.

Notably, he refused[55] to use his powers to manipulate Mr. Verres into killing Abraham.

Abilities when having a body[edit | edit source]

Magus is from a universe where magic is commonplace, and was studying at a school there, specifically, learning to be a battle mage.[6] His magic works even in the main EGS universe, although he's not sure why.[33] This includes: 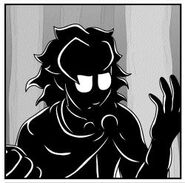 Retrieved from "https://elgoonishshive.fandom.com/wiki/Magus?oldid=47191"
Community content is available under CC-BY-SA unless otherwise noted.