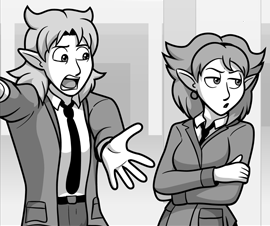 Helena and Demetrius,[1] popularly known as the French Immortals prior to the revelation of their names,[2] are two immortals who have absolutely no idea who they are, or why they are following Elliot around.[3] According to Magus, they seem to have had an improper reset.[4] Because of this, they are experiencing worse than usual memory loss and have forgotten their memory retrieval techniques. In order to jog their memories, they've decided to keep following and guard Elliot, which is the only thing they remember they needed to do.[5] For some reason, they sometimes follow him while tangible and visible,[6][7][8][9] using "disguises" like shirts informing people that they are "everyday students".[3]

Helena has been doing the recaps and narrations since the birthday party story arc.[10][11] While narrating, she commented she doesn't like how clueless Elliot and Ellen are about how their new magic works.[12]

When another immortal tried to convince Dame Tara (griffin) that immortals can't lie, she couldn't take it, revealed herself and proved him wrong.[13] Then she and Demetrius shown in "faerie" shape[14] (small and flying) to help coordinate Tara's and Elliot's escape from the mall without the crowd overhearing.

Prior to their failed reset, Helena and Demetrius awakened Nanase and gave Susan her magic mark while they were in France in order to kill the Aberration that had been preying on women there.[15][5] It is uncertain why they did this, because later, it was revealed that there was no need to empower Susan and Nanase as there were both civilians and government officials who could have dealt with the aberration.[16]

Before the reset, they knew about Magus, although they forgot it when reseting.[17] It is therefore possible that the reason they follow Elliot is related to Magus or why Magus needs him. Right before the events of Grace's Birthday, they detected Magus amplifying Ellen's emotions, but he managed to escape.[18]

It is eventually revealed that when Magus first arrived in the main universe, they (or rather their previous selves) decided that "his time was already over" and attempted repeatedly to kill him[19]. They even followed him to France, only giving up after they were distracted by the French Aberration and somehow ended up resetting improperly.

Despite improper reset, they still have not only basic abilities like becoming invisible and intangible or sensing magic, they can also create some magic-based technology.[20]

The French Immortals' forms before their most recent reset.

The French Immortals in their first appearance.
Add a photo to this gallery

Retrieved from "https://elgoonishshive.fandom.com/wiki/Helena_and_Demetrius?oldid=36635"
Community content is available under CC-BY-SA unless otherwise noted.