EGS Main Story Comic for 2004-12-06 ("See Part II Of EGS:NPs ‘Magic Comic Shop’ To Learn More About Nanase’s Book")
Diane, also referred to as Mongoose by Susan during Identity,[2] is Adrian Raven's separated daughter and a distant relative of Susan.[3] She studies at Moperville South and seems to be focused mainly on her appearance and popularity. She has frequently tried to get Nanase to sit with her and her friends, Lucy and Rhoda. All of her attempts have failed, and in light of Nanase being publicly out of the closet, she may have ceased trying. She appears much kinder than Nanase gives her credit for. She also seems to be good at deductive reasoning, surmising that Ellen and Grace were new to the school simply by noticing them and their movements.[4]

Another difference about Diane and Susan is that Susan is a big nerd. Diane is afraid of becoming a nerd.[5]

Diane learned she and Rhea are adopted at age six[6] and it was big deal for her. She also liked being called barbie at that age.[7]

In elementary school, she thought all boys (except her father) were mean jerks.[8]

When Diane first appeared, her focus on appearance and popularity included manipulating boys into spending money on her.[9][10] Recently she seems to have outgrown that,[11] commenting that she doesn't want Elliot just to buy her nice things but for a real relationship[12] - although it surprised her as well.

Despite her dating a lot of boys, she's still a virgin.[13]

For long time, it was heavily hinted and even directly said by Jerry[14] and widely believed by both readers and characters[15][16] that Susan is Diane's twin sister. They looked like identical twins until Susan awakened,[17] but they dress differently and Diane doesn't dye her hair. After Susan's awakening, Susan's natural hair color changed from blonde to the dark blue color she had been dyeing it and she grew three inches taller than Diane.

Edward Verres mentions that the hospital records indicate that Susan and Diane are not twins,[18] but that they are plausibly half-sisters by different mothers, given Susan's father's penchant for infidelity.[19]

Another difference about Diane and Susan is that where Susan is a proud Star Trek nerd, Diane considers "nerd" an insult.[5] They probably have differing definitions of "nerd" however since Diane believes it means putting trivia and "correctness" before people and their feelings.[20]

Note: While Diane was sure about them being sisters,[15] no one tried to tell Susan[21] except the initial rejected attempt[22] until the Maybe Sisters storyline.[23]

Dame Tara's statement about Diane being a potential vampire hunter[24] probably means she has same natural talent for summoning that Susan has, again confirming their kinship. Both have been targeted by vampires because of their vampire-hunting potential.

Pandora Raven later revealed that they are related, but not closely: Diane is a daughter of Adrian Raven, while Susan is a much more distant descendant, making Susan Diane's great-to-the-double-digit-nth-degree (meaning at least 10 "greats") niece.[3] Note: The approximate minimum number of familial generations separating them can be deduced based on how old Pandora was at the time she most recently reset (at least 599[25] years old) and the number of generations of humans could have lived in that time (assuming a generation length of at most 30 years) to arrive at about 20 generations (599 divided by 30).

Adrian Raven is Diane's father, as stated by Pandora.[3] As of the beginning of The New World, she considers him to be a deadbeat dad[26] even though she witnessed Pandora's reveal about their relationship (and his reaction to it). Logically, that event should have made it clear to her that he didn't know about his relationship to her until then and therefore wasn't being intentionally negligent in fulfilling his parental responsibilities but then again she wasn't an objective observer; maybe she considers not knowing about her a mitigating factor but not something which would make him not guilty. Based on the EGS Main Story Comic for 2018-08-20 it seems that her opinion of him was negative from a very early age. She may have held the belief that he abandoned her since the time when she discovered she was adopted and thus would find it hard to think differently of him regardless of what she recently learned of him.

Diane decided she wanted Elliot to be a temporary boyfriend who buys her things when she overheard Nanase and Sarah talking about him. As she gets to know him and his crowd, her initial superficial interest in him is becoming more genuine; as well, her immediate resentment of Susan for being close to Elliot seemed to be supplanted by the internalization of the idea that Susan is her sister.[12]

Diane met Ellen on Ellen's first day of school. She introduced herself before classes but was unimpressed with Ellen's reaction.[17] She learned that Ellen was Elliot's sister before the party in the Family Tree storyline, and immediately attempted to finagle an introduction to Elliot; Nanase saw through Diane and forced her to say she wanted to meet Susan as well.

Diane was part of the gossip network outing Justin.[27] (She also features in the background of another Justin flashback image[10]). She called Justin "defective"[28] because he won't buy her stuff and said he'll scare away guys who would.[9] On the other hand, she might not even be bothering to remember his name:[17] while she may be faking it, it's possible "the gay guy with name starting with J" is only thing she knows about him.

Dan has suggested that Diane may harbor resentment that Rick will never like her back,[11] based on her singling out Rick (along with Rhea) as someone who was to be saved[31] and them knowing each other for a long time.[32]

Diane considers Nanase to be the coolest person she ever met,[33] possibly because she's aware of her having magic.[34] She has frequently tried to get Nanase to sit with her and her friends, Lucy and Rhoda.[9] Charlotte thinks Diane has platonic woman-crush on Nanase ... at least Charlotte hopes it's platonic.[35]

Diane thinks griffins are cool.[36] It's not certain if that was true before meeting Dame Tara and Andrea.

Lucy is one of the girls in Diane's group which manipulates boys into spending money on them. She may be taking the goal of the group even more seriously than Diane in the "trying to get and maintain alpha social status" sense and complains when she sees something which could endanger it, like going to a "nerd" movie,[36] and is critical of Diane seeking a serious relationship[37] or changing the style of her clothes.[38] It is implied that Lucy was a closeted lesbian and had a crush on Diane[39] which she has harbored since junior high school.[40] After she finally admitted it,[41] the two now seem to be in a relationship.[42]

Rhoda is one of the girls in Diane's group. Diane is protective of her.[43]

Very little is known about her adoptive parents; basically just that they didn't agree with her getting drunk[44] and that she thought very highly of them when younger (and presumably still does).[45]

Diane is not even "dreaming", let alone close to awakening, but she has the same or a similar latent magical talent for summoning magic weapons as Susan have,[46] making her a potential vampire hunter.[24]

After the meeting with Susan, Pandora Raven and Adrian Raven she decided to get a haircut.[49] It is not known if Susan commented[50] that it's a Romulan like haircut in-universe.[51] Rhoda thought it's cute, Lucy did not.[52]

Similarly to Susan's curiosity and logic, Diane has anthropomorphic personifications of different sides of her personality. These ones are the traditional angel and devil,[53] although the devil is more of a jerk than really evil.

The car Diane drives in So a Date at the Mall seems to be a Chrysler PT Cruiser.[54]

Dan has confirmed on the EGS sub-reddit that Diane is named after Diane Chambers, Shelley Long's character from the 1980's TV sitcom Cheers.[55][56]

Diane in her first appearance as colored by an unknown person

Diane mortified by the possibility she could become a nerd 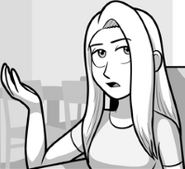 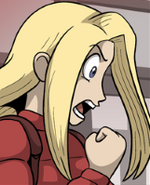 Diane in color
Add a photo to this gallery

Retrieved from "https://elgoonishshive.fandom.com/wiki/Diane?oldid=39570"
Community content is available under CC-BY-SA unless otherwise noted.