Arthur J. Arthur is the former and current head of the Moperville local FBI branch of paranormal investigators.[1] He is also a renowned author, and presents himself to the general public as a skeptic and former consultant to the FBI as part of his strategy to keep the paranormal secret. He preceded Mr. Verres in the position, and came out of retirement to succeed him. Tedd has met him when he was younger. He is not opposed to revealing the existence of magic if it is unavoidable that it would be revealed eventually, but is intent on keeping the accessibility of magic secret. He also chose to allow local police and teenagers to fight a dragon rather than reveal that the Federal government has magic users.[2] As said by Jerry, he is more concerned with keeping secrets than helping people.[3]

The first drawings of Arthur were intended as being for a different character, but Dan liked the design and wanted to use it for this character as opposed to Sirleck's host. Arthur's character originally had longer hair, which Dan felt made him look too similar to Sirleck's host, so Dan edited the comic to give Arthur shorter hair.

He values the needs of the many over the few to a somewhat frightening degree. It’s easier for him to do that when he distances himself from the few, however.[5] He is also willing to make sacrifices in the short term for what he expects to be a better long term. He’s also got a bit of nationalism to him in that he’s proud to be an American and a lot of what he’s willing to do is to protect the freedom of (most) of its people.[6]

As a Seer who knows magic, he was called in for determining the severity of Magic Change. He originally proposed severe magic change hoping it will help in keeping it secret, just like in past[7] - in fact, he counted on it, although he wasn't aware how the process work.

He immediately changed mind when realizing that there are around thousand of seers who would be informed about magic change[8] and was horrified finding out that seers are chosen genetically.

He supports Tedd as scientist and decided to fund her lab ... although commenting she has best qualification - being seer, not a foreign child and not old man dragged out of retirement.[9]

Initially having met Tedd as a woman, he consistently uses she/her pronouns, despite having previously known of Tedd as Edward Verres's son.

Sybil is his secretary. She seems inordinately attached to him for an employee, and it is known that he has a daughter.

Kevin the magic wand was created by him. 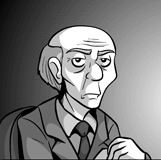 Retrieved from "https://elgoonishshive.fandom.com/wiki/Arthur?oldid=43682"
Community content is available under CC-BY-SA unless otherwise noted.