Agent Wolf is a agent who works for a government agency (probably the paranormal division of the FBI) together with Agent Cranium and Edward Verres. He is one of the most powerful wizards in the mid-western United States, according to Adrian Raven.[1]

He seems to have some issue with aliens, as if he isn't fully informed about Uryuoms: he tends to blame everything on aliens, and insists that Lavender is an alien, though she is clearly not (in a legal sense at least).[2] He has a conspiracy notebook, although he and his co-workers are responsible for government conspiracies, as far as magic is concerned.

He worked on a case involving a dimension-shifting walrus.[3]

In Hidden Genesis, he (along with Cranium) was investigating the event likely caused by Magus arrival and Pandora's appearance,[3] but was later removed because they didn't have anything to go on.[4]

In Sister II, he (along with Cranium) arrived shortly after Nanase in her Guardian form defeated Abraham.[5] He helped to take Nanase to a hospital, then probably talked with Adrian Raven there.[1] Then he tried to talk with Abraham but found out he had changed back to stone already.[6]

In Family Tree, based on Diane's call, he arrived (along with Cranium, who he was at a party with) shortly after Edward Verres.[7] He mentioned a legendary monster hunter with a long family history of fighting monsters and evil wizards and that he and Agent Cranium are dating, neither of which he should be saying anything about.[8]

It is hard to say which of them is worse in hiding their relationship ...[8][9]

While he hasn't actually used magic in-panel yet, Adrian Raven said he is one of most powerful wizards in the mid-western United States.[1]

"Wizard, you are under arrest for trespassing, assault, kidnapping, and a whole mess of other stuff!"
—EGS Main Story Comic for 2009-10-26

"And that's classified. I said nothing, and if I did, it was the summary of an anime Cranium makes me watch on our dates. Also, we're not dating."
—EGS Main Story Comic for 2013-08-22

The name "Wolf" is a play on Agent Fox Mulder from X-Files. 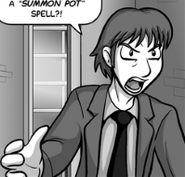 Wolf angry at the joking guards. 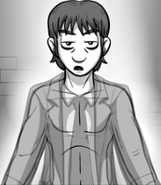 Wolf being checked with some glasses that act as a "roentgen" scanner.
Add a photo to this gallery

Retrieved from "https://elgoonishshive.fandom.com/wiki/Agent_Wolf?oldid=34491"
Community content is available under CC-BY-SA unless otherwise noted.