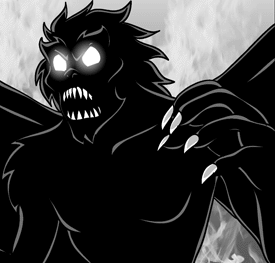 An Aberration is "any person who has undergone a process [involving magic] turning themselves into parasitic monsters, physically and mentally, in an effort to unnaturally extend their own lives".[1] So far every aberration we saw was unique, but presumably they tend to follow similar patterns, if only because of common inspiration. One subgroup of aberrations is called body snatchers ; no other group was explicitly named yet.

Aberrations are also called vampires. While Vampires in general don't share fixed set of traits, aberrations are above-average examples of this: not only we didn't saw traits like aversion to garlic, sensitivity to sunlight, the ability to turn people into vampires, arithmomania, need of invitation or an aversion to holy symbols, also only some aberrations drink blood. In addition, aberrations are not considered undead, as the undead do not exist in the EGS multiverse; this information is irrefutable, as it was given by Dan.[2]

Aberrations vary greatly in form, abilities, and method of being all spooky and parasitic, but they all have the following things in common:[3]

The magic weapons weakness makes people with talent to summon magic weapons - like Susan or Diane - natural vampire hunters. There is no "default" method for detecting such ability, but vampires are trying to find some and most succeed.[5] Usually it's to avoid them - while both Susan[6] and Diane[7][8] was attacked before awakening, most vampires are not able to distinguish that and avoid all people with such talent even if not awakened.[5]

A body snatcher possesses a human host and controls its host's body entirely. A body snatcher is considered the worst kind of aberration by immortals[9]. It can continue possessing its current host's body even after its host becomes brain-dead, but it cannot begin to possess an already brain-dead host, even if it possessed it previously.[10] It can communicate with beings on the spiritual plane independently from its host. Beings on the physical plane see only its host, not the aberration itself. It can change hosts at will. The only known aberration of this type is Sirleck.

The first aberration seen in canon was Sirleck, a body snatcher aberration.[11] However, we only found about aberrations and him being one later.[12]

The first aberration said to be an aberration resembled the traditional vampire most of all shown aberrations. It hypnotized young women and sucked blood out of their necks. It could sense people with the potential to cause it harm.[6] This aberration attacked Susan and Nanase during their trip to France,[13] and it was subsequently killed by Susan[14] with help from Nanase[15] and the French Immortals.[16]

The spider (or spiderman)-like aberration looks close to the vampire one, but seems to not use hypnosis. He also identifies himself as vampire.[17] He detected Diane or Charlotte (probably Diane) as a potential hunter.[7][18] and attacked them.[8] After Diane talked to him to stall for time[17] he was attacked by Andrea.[19] During the ensuing fight he summoned bombs.[20] Then Dame Tara killed him.[21] He implied that he was part of an organized group[20][22] He was probably one of the mercenaries sent by Sirleck and Magus[23] to test if Helena and Demetrius could be distracted.[24]

This aberration looked like having another mouth in belly and eyes above that and ate people whole.[25] He was a wizard.[26] He also had a human form.[27] He was one of the mercenaries sent by Sirleck and Magus to attack Adrian Raven in order to distract Helena and Demetrius. He suggested killing other people than Raven during the mission and lie to Sirleck about the victims having magic weapons but Scarf thought that a bad idea.[28] During the fight at the mall he attacked Adrian Raven with fire.[26] Pandora killed him along with Scarf and the koala aberration.[29]

This aberration was apparently the leader of Sirleck's mercenaries.[28][30][31] He looked human other than his big pointed teeth which were usually hidden by a scarf. He was disgusted by Gullet's method of feeding[25] and threatened him to make him obey the order not to kill anyone other than Adrian Raven and vampire hunters.[28] He instructed the koala aberration to leave Adrian Raven to him.[31] He tried to shoot Raven with his gun when Raven was fighting Gullet[32] but Pandora blew up the gun and killed him along with Gullet and the koala aberration.[29]

This aberration had a koala-like monstruous form.[33] He first appeared asking Susan and Diane for money for an obviously unserious charity called the Save the American Kangaroo Foundation.[34] He reported to Scarf that there were hunters at the mall.[30] After Susan killed the snake vampire he attacked her from the ceiling but she dodged him thanks to Diane's warning.[33] He fled from Susan[35] because he sensed Adrian Raven approaching.[31] While Raven was fighting Gullet he attacked Susan again but she managed to hammer him thanks to little Nase seeing him.[36] Pandora killed him along with Scarf and Gullet.[29]

Andrea killed six vampires before the encounter with the spider vampire.[37] They were probably mercenaries sent by Sirleck and Magus[23] to test if Helena and Demetrius could be distracted.[24]

A fluffy snake-like aberration wearing a bow and a Dracula cape chased a child at the beginning of the attack on Adrian Raven at the mall. Little Nase stunned him by exploding in his face and Susan decapitated him.[41]

A centaur-like aberration with a scorpion-like tail was killed by Adrian Raven with his murder shroud spell.[42]

Note that while not specifically mentioned, looking at their teeth, neither the Koala nor these three animal hybrid are drinking blood ; they probably eat people whole, although possibly not in one piece like Gullet.

Retrieved from "https://elgoonishshive.fandom.com/wiki/Aberration?oldid=32721"
Community content is available under CC-BY-SA unless otherwise noted.